Not reviewed yet
Overview
Keyfacts
Description

It is located at Montparnasse, in rue du Depart, just in front of the 210m Montparnasse Tower.It is located on the 9th floor of a modern building with two elevators. The apartment offers a master bedroom with a double bed and an antique wardrobe. There is a large living room with one sofa convertible in a comfortable bed for two people. The living room provides also an antique console with a mirror, a large dining table with four chairs, and minor furnishings.

There are a fully equipped kitchen, a bathroom with a shower-tub, and a toilette room.
Finally, the apartment offers a large balcony where you can take your breakfast or taste a drink. 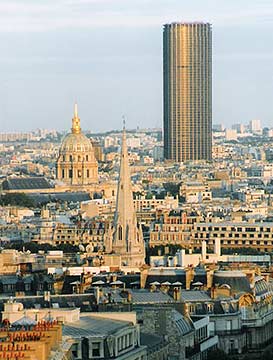 <= The Montparnasse Tower, the biggest building in Paris

In the first three decades of the 20th century, Montparnasse was a thriving artistic and literary centre. Many modern painters and sculptors, new novelists and poets, the great and the young were drawn to this area. Its ateliers, conviviality and renewed Bohemian lifestyle made it a magnet for genius, some of them French but many of them foreigners. The great epoque ended with World War II and continued with the destruction of many ateliers. In the beginning of the 70th's, the Tour Montparnasse was constructed – it is Paris’s tallest tower, which heralded the more modern part of Montparnasse. But the area has not lost its appeal. The great cafés remain very much in business and attract a lively international crowd. You can find cinemas, pubs, crêperies, various restaurants and many high-street fashion boutique, such as those in the annexe at the Galeries Lafayette and the rue de Rennes. Many theatres and small cafes are also located on the Rue de la Gaité, which is part of the Historical Axis, where artists such as Apollinaire, Matisse and Henri Rousseau once congregated.

Amenities
Facilities
Policies
Elevator in building Pets not allowed, Smoking not allowed
Check in:
2:00 PM
Check out:
11:00 AM
Map
Rates

FURNISHED APARTMENTS IN THE HEART OF PARIS SINCE 2005

Book Now
Loading...
Upps!
You're running a web browser we don't fully support. Please upgrade it for a better experience.
Our site works best with Google Chrome.
How to upgrade the browser